According to the Labor Department, unemployed workers spent a median duration of 8.5 weeks off the job in July, down from 14.4 weeks a year earlier. This is because there are nearly twice as many job openings as unemployed people.

In many cases, workers are finding positions that offer higher pay and better benefits after being laid off. Sarah Chaney Cambon, an economics reporter for The Wall Street Journal, wrote in an article that “with job opportunities so abundant, many unemployed workers are finding jobs that suit them within a matter of weeks or even days.” She spoke with “Marketplace” host Reema Khrais about how laid-off workers are finding new jobs and the current status of the labor market.

First, the job market is in crisis. 81% of workers are burned out, people are taking a vacation, and employees just want a break. The pandemic exhaustion has hit everyone, yet work hours keep going up as demand for products and services stays high.

This demand for workers (528,000 jobs were created last month) is counter-balanced by this never-ending news cycle about a “recession.” Well, while the GDP has slowed and the Fed has increased interest rates, the real demand for products and services has not slowed.

Yes, the Fed will continue to increase rates, and while inflation has slowed, this cycle is not over. We are in a secular downcycle after 14 years of the boom, so we all have to accept that growth rates will slow and demand will shift. But that’s not to mean the economy is grinding to a halt. Quite the opposite.

As our Global Workforce Intelligence research points out, more and more industries are being redefined. For instance, retailers are becoming healthcare companies (Amazon Care will become more significant than Amazon Prime, as the company just acquired OneMedical and announced partnerships with Ginger and others). Auto companies are becoming electric manufacturers (Ford’s layoff is more of an engineering transition from internal combustion technology to electronic technology). Chemical and Oil companies are moving into Hydrogen and Batteries. And healthcare companies are struggling to become more efficient.

What Should CEOs and CHROs Do?

You have to accept that this is not a traditional “demand-driven” downcycle. This is a rapid change in demand, accelerated by the pandemic and fifteen years of digital disruption. So rather than just “lay people off” (of course, some tech companies did vastly overhire), you need to “redeploy” your people into these new industry roles.

It’s interesting that the PWC survey showed that 63% of companies want to “change processes to address the labor shortage.” This is the redesign I’m talking about.

We define this as a new “systemic approach” to HR, where you look at Recruit, Reskill, Retain, and Redesign all at once. 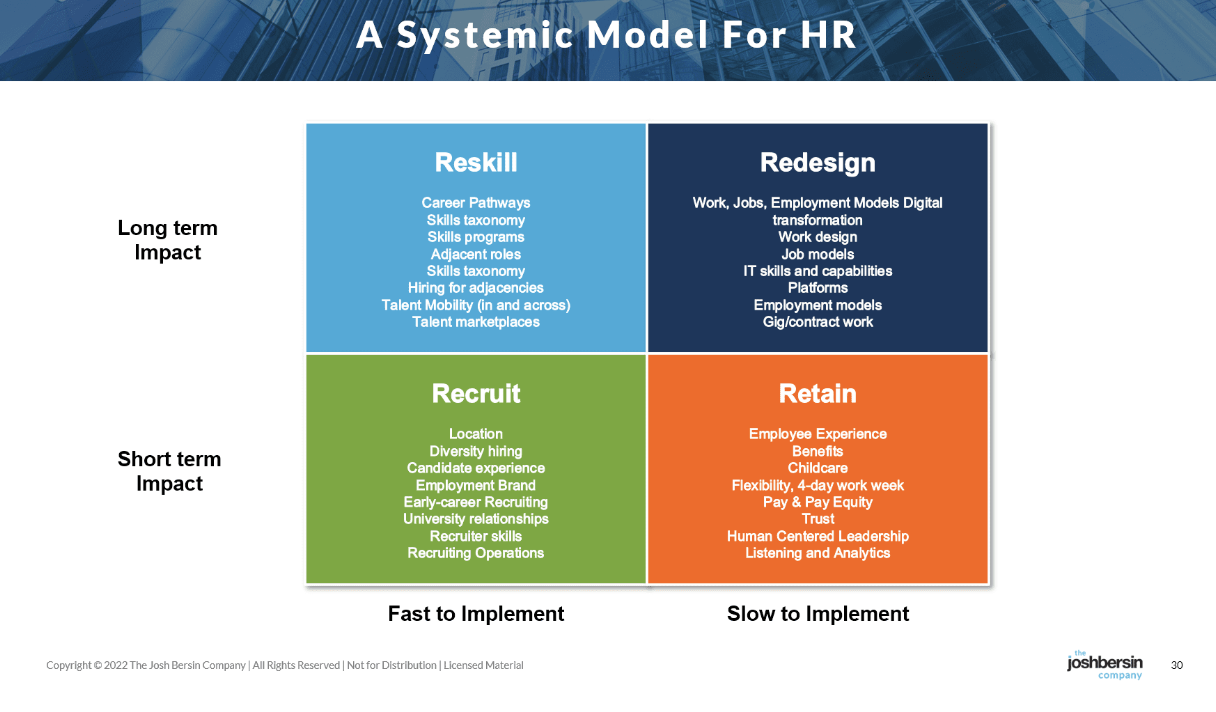 In many ways, this is a healthy thing. Companies that figure this out quickly can climb the new growth curve as their markets and industries change.

The labor market has remained a rare bright spot in the economy so far, amid a worsening outlook in other parts of the economy. Federal Reserve officials, including Chair Jerome Powell have pointed to the labor market’s strength as a sign that the U.S. economy would be able to withstand tighter monetary policy.

“While the labor market remains very strong, there are some signs of cracks in the fissure, including hiring freezes at major tech companies and layoffs of white-collar workers at companies such as Ford (F) and Walmart (WMT). If the economy continues to soften, job cuts could become a narrative of the fourth quarter,” said Caleb Silver, Editor-in-Chief of Investopedia. 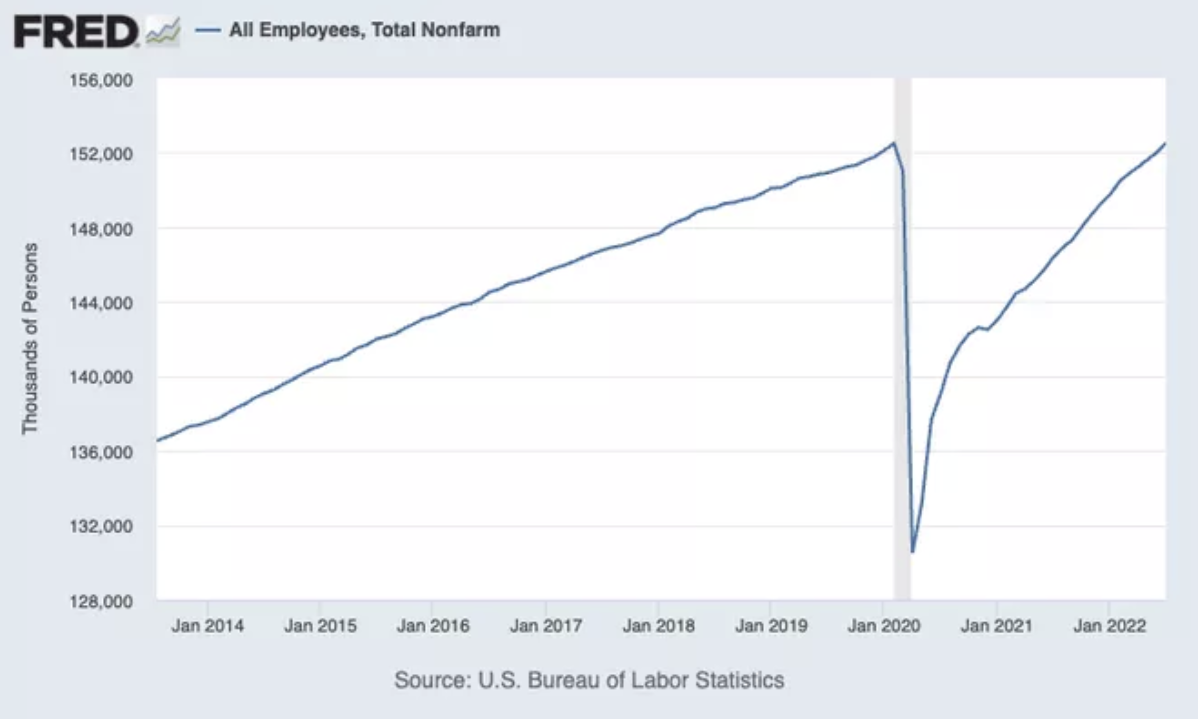 The average hourly earnings for freelancers are $93

A significantly positive finding of the study is freelancers tend to have more time to focus on non-work activities and personal commitments. For many, that is a huge win.

MOST freelancers in the Philippines manage their own business while doing gigs on the side, according to a report on the local freelance market by mobile wallet GCash and financial services company Payoneer.

The Philippines Freelance Market 2022 Report also found that Filipino freelance workers who take jobs from both local and overseas clients earn 57% more per hour than their peers who work just locally.

The top three freelance jobs that Filipinos take are sales and marketing (32%), customer service (21%), and data entry/internet research (20%). The rise of social media has also paved the way for freelancers in creative/media graphic design (7%).

In Payoneer’s Global Gig Economy Index 2019, the Philippines ranked as the sixth fastest-growing market in the world, which GCash and Payoneer attributed to a 35% rise in freelance earnings.

Still, many are willing to undergo freelance training, whether by taking training related to their job (38%) or attending courses to develop a general freelance skill set (19%).

“Despite the unpredictability of a steady income stream and job stability, Filipino freelancers continue to take advantage of the benefits of freelancing such as job flexibility, workload control, and greater earning potential from multiple income streams,” the report said. — Brontë H. Lacsamana.

6. Many Americans have happily ditched 9-to-5 office jobs. A recession could force others to join them — and change ideas of work forever | Insider, Aug 31, 2022

Americans have embraced the return to normal — traveling, eating out, and seeing movies. But when it comes to work, many have tried something different: saying goodbye to a conventional 9-to-5.

The alternatives? Starting a business, turning to freelance and gig work, or setting stricter work-life boundaries.

For some, the switch was necessary following a layoff, while others simply weren’t happy at their jobs. If the labor market weakens, even those who are perfectly fine with the 9-to-5 lifestyle could find themselves pursuing non-traditional work to make ends meet. They will face challenges, but for some, it could be a blessing in disguise.

Per Bloomberg calculations, there were roughly 16.8 million self-employed Americans as of June, accounting for over 10% of the workforce and the highest share since 2008.

As many as 90% of startups ultimately fail, and the absence of consistent income and benefits can create real challenges, even for entrepreneurs who are ultimately successful. This is among the reasons self-employment ticks up during recessions — many people don’t pursue it unless they have to.

Perhaps the most obvious way Americans’ working lives have strayed from the traditional 9-to-5 is the adoption of remote work. Per a June WFH Research survey, 15% of full-time employees are fully remote, 30% are hybrid, and the remaining 55% are on-site full-time.

Other Americans have been open to working a 9-to-5 but prefer to do so only four days per week. Some companies and lawmakers are open to this. Rep. Mark Takano, a Democrat from California, has proposed legislation that would bring the standard work week down to 32 hours.

“We use freelancers occasionally, but it really depends on the job at hand and how accessible freelancers are for that job,” Sean Nguyen, director of Internet Advisor, said in a statement. “For example, we recently hired a freelancer to assist on a marketing project—specifically focusing on design aspects of the content that we created for the campaign.

“We’ve found that it’s much easier to locate good freelancers for marketing jobs like this as opposed to freelancers for positions more closely related to tech. In my experience, there are a lot more tech freelancers that don’t quite have the skills necessary for the jobs we generally need them for, which is why we’ve chosen to leverage technology in those areas of our business,” he concluded.